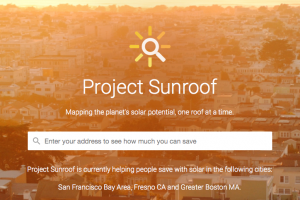 Chase Daily, DBM Solar’s CEO and founding partner, comments on Project Sunroof. “Google has done some amazing things over the last two decades, but Project Sunroof has the potential to be among their most innovative features yet.” Mr. Daily continues, “This is something that society should be thankful for. Not just solar companies, but homeowners and businesses. There are so many that can benefit from more adoption of solar technologies. I’m excited for Project Sunroof, and I hope it comes to Utah, soon.”

By entering the homeowner’s address into Project Sunroof’s website, homeowners can made aware whether significant amount of sunlight is reaching their roofs. If sunlight data is available, homeowners will learn which part of their house is getting more sunlight, the capacity of their roofs in holding solar panels, and how much money they can save yearly by utilizing solar power.

Project Sunroof’s data comes from existing Google Earth and Google Maps data. The solar data is acquired from the calculation of the shadows from structures and trees, historical weather, and temperature patterns. Also, homeowners will be provided a list of local solar power companies capable of installing panels in their area – a great advantage for both the solar panel companies and solar power consumers.