Atlantic’s Hurricane Season is here. Hurricanes and tropical cyclone activity starts as early as May, peak in late summer, and storms typically run through September. The sheer power of a hurricane is amazing.

Did you know that an average hurricane produces most of its rain fill on the inner rotations than the outer area? Surprisingly, this rainfall is a greater source of energy than the wind of a hurricane. Most of a hurricane’s energy is released when converting water vapor into droplets.

The energy of the rainfall produced by a hurricane translates into 200 times more electrical generating capacity than what the world currently produces. The kinetic energy from a hurricane’s wind is equal to nearly half of the world’s total electrical producing capacity. How much power does the world consume anyway?

For 2012, the International Energy Agency (“IEA”) estimated that world energy usage equated 155,505 terawatt-hour. By far, the majority of that energy was produced from non-renewable energy sources, primarily oil, coal, and gas. 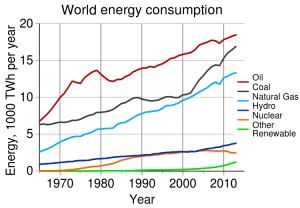 Luckily, renewable energy grew the fastest based on a before and after percentage relative to previous usage. Considering how much power the world consumes, and a hurricane produces 200 times more energy than that, it’s amazing how strong one hurricane is. What if we could harness it for good as an additional form of natural energy? The possibilities would be endless.