Solar Impulse is a solar-powered, experimental, long-range aircraft that is a privately financed project out of Switzerland. Solar Impulse was designed to remain airborne up to 36 hours, with the long-term goal of completing a world circumnavigation using only solar power. It was unveiled in 2009, made its first historic flight in 2010, and flew across the US by 2013. 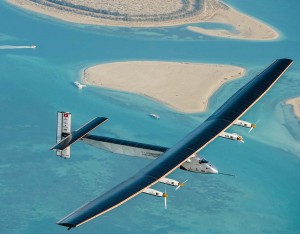 The current version of Solar Impulse, dubbed Solar Impulse 2, was revealed in 2014. Solar Impulse 2 has a few improvements over the original version of the plane. It’s larger, has a more powerful motor, and more solar cells than its previous version. In March 2015, it kicked off a journey of around 24,855 miles with stops in 12 destinations.

The Solar Impulse is a bit wider than a Boeing 747 Jumbo Jet and measures a wingspan of 236 feet. It weighs around 5,071 pounds and has room only for a single pilot.

Solar Impulse’s wings are covered with 17,248 solar cells. All are mono-crystalline silicon cells with a thickness of 135 microns each. They are mounted on the wings, horizontal tailplane, and the fuselage – designed to provide the perfect combination of flexibility, lightness, and efficiency.

The plane consists of lithium polymer batteries that are energized using the solar powered wings. They are fixed in the four engine nacelles (a housing that holds fuel, engines, and other equipment on an aircraft). Insulated with high-density foam, the batteries weigh around 1395 pounds, making up a quarter of the aircraft’s overall weight.

The generation and storage of energy powers the four sensorless and brushless motors that are mounted below the wings. Each generates 17.4 horsepower, accounting up to 94 percent efficiency.

Its weight equals to a small van and is constructed almost ten times lighter than the best glider available. Innovative sheets of carbon have been used to keep the plane light as possible. Also, the airframe is made up of composite material, providing robustness.

Can Solar Impulse Fly in the Dark?

Yes, it can. During daytime, it climbs to the maximum altitude to gather most of the sun rays. At night, it descends to a lower altitude to save energy. Theoretically, under the right weather conditions, the aircraft can remain in uninterrupted stable flight indefinitely. But practically, not possible due to pilots needing food, water, and “pit stops.”