Imagine a world where everyone benefits from solar energy. Imagine a clean planet. Imagine safer living. This are the ideas of the couple Scott (engineer) and Julie (psychotherapist) Brusaw when they started the “Solar Roadway Project.”

What is Solar Roadway?

Solar Roadways Incorporated is a startup company based in Sandpoint, Idaho. It was founded by the Brusaw couple, Scott (President and CEO) and Julie in 2006. The company’s vision is to replace asphalt surfaces with structurally-engineered solar panels. 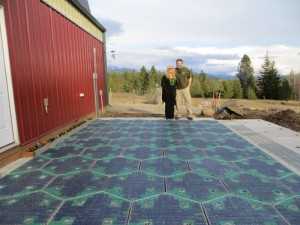 As explained by the Brusaw’s, this technology is a fusion of a transparent driving surface with underlying solar cells, electronics and sensors to act as a solar array with programmable capability.

The Challenge with Solar Roadways

The idea of developing a “smart highway” exciting, unique, and promising. Not to mention the health and environmental benefits should it become fully implemented. However, just like other science projects, Solar Roadways have run into skepticism and hurdles.

Funds and resources top the main problems. A glimmer of hope surfaced in 2009. Brusaw’s efforts paid off when he earned a $100,000 Small Business Innovation Research (SBIR) grant from the Department of Transportation (DOT). The grant was to fund creating a solar parking lot. It was followed by another SBIR grant from the same department. A whopping $750,000 for Phase II and the creation of a solar parking lot.

SBIR’s grant money led to the creation of a 12-by-36-foot parking lot covered with hexagonal-shaped glass embedded with solar panels beneath. The prototype was a success.

In April 2014, the campaign continued to expand as the company used Indiegogo for crowdfunding. The campaign became on of Indiegogo’s most popular campaigns and raised $2.2 million dollars.

The idea is novel. What a better world we would live in with easily lit roadways, less pollution from creating the roadways, etc. However, engineers, financial experts, and others criticize the project, claiming that it is financially impossible to scale fully Solar Roadways. The cost adds up.

“Imagine driving from Seattle to Florida in an EV that is being charged with clean sunshine while driving on the highway. Imagine the jobs that will have
been created, how many families will have been supported while getting to that point.” – Julie Brusaw